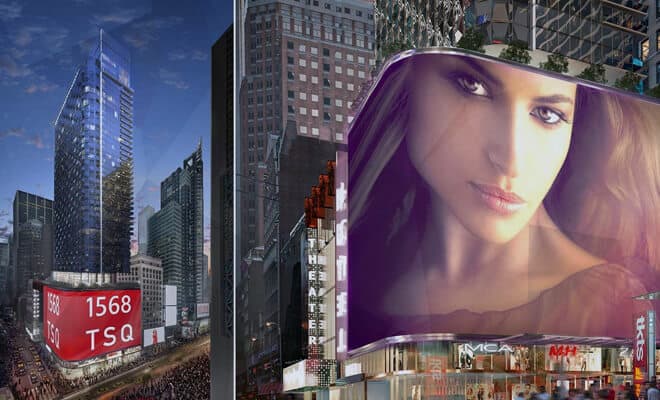 Project at a Glance

1568 Broadway is set to be delivered 6 months earlier than expected costing 100 million dollars less, thanks to HSE Contractors Inc.

For those who do not know about the 1568 engineering miracle, The 1568 Broadway project is a 2 Billion dollars redevelopment plan targeting to transform the double tree Hilton hotel and the palace theater right next to it, to an iconic cultural and entertaining experience in the #1 tourist destination in the world. The project will constitute of developing a 47 story, 500,000 square foot mixed-use project comprised of a 700 key boutique hotel. The renovation efforts will also see the addition of 66,000 square feet of retail space spread out over four floors, and 40,000 square feet for a restaurant, bar, and a nightclub, all in addition to the new hotel as well as a 17,000 square foot outdoor HD LED sign making that projected sign only a 1000 square foot small of being the largest sign in the world. The developers of this project are working together to come up with a plan to physically elevate the theater for a distance of 29 feet within the Doubletree hotel it is enclosed in and then build a retail and entertainment area within the area emptied as a result of the elevation process

After carefully reviewing the design of the 1568 Broadway Project for 2 weeks and while attending a meeting with all of the project’s owners, HSE had a few points to raise.

In the project’s original design, the hotel’s floors starting from the 12th level up until and including 15th floor would have been deprived of any commercial benefit due to the fact that the project’s designer was planning to formulate trusses in the mentioned 4 floors while using 2 floors of the 4 for the sake of the tower’s mechanical and electrical utilities and equipment. With their eyes set on maximizing the project’s induced to profit, HSE had another idea through which they could occupy only 3 of the previously mentioned 4 floors thus emptying a whole floor making it ready to be occupied by more hotel rooms thus generating an extra daily profit that could reach to tens of thousands of dollars every day.

In HSE’s view, this could be achieved through forming what is commonly named as a “transfer slab”. The idea is to transform a whole floor into one heck of a concrete bulk serving the same purpose and benefit that the 4 floored truss design would have achieved. And while maintaining the electrical and mechanical equipment in the next 2 floors. Those 2 floors will be solely for the use of the mechanical and electrical utilities separately hence easing out any required electrical or mechanical maintenance. This leaves us with an empty floor ready to be commercially used to reach that extra mile of generated revenue.

Email us for more info about our Construction Scheduling Services