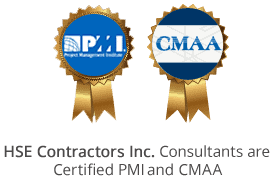 HSE Contractors is insured by the following professional liability policies, up to $4,000,000 for our clients’ protection:
General Liability.
Workers Comp

The first step in the critical path method, or CPM,, is the precise specification and identification of each task or activity that comprises project. As an aside, because a graphic presentation is created of the activities that comprise CPM, this step fairly can be called the visualization of each activity.

The activity identification and listing should include only those higher-level activities. If too much specification is utilized in enumerating the activities, the critical path analysis becomes far to complicated and impossible to manage. In other words, failing to broadly identify activities can result in CPM not fulfilling its intended purpose of keeping a project on track.

In specifying each project activity, the starting point is the identification of the primary deliverables. From this identification, and the placement of the higher-level activities referenced a moment ago, smaller work tasks can be identified.

As noted, CPM involves a graphic presentation of each activity and the overall process. There are a number of ways to accomplish this visualization or display, including a graphic outline (which oftentimes is the easier option) to a tree structure to the utilization table and lists.

The next step in CPM is the identification and delineation of interrelated project dependencies. In any project, some activities are dependent upon the completion of others. A key step is graphically presenting dependent activities in a proper in a correct order. The utilization of the critical path method necessitates the presentation of three questions about the activities set forth in step one:

After primary activities and associated dependencies are identified, the critical path analysis chart, or CPA, can be created. This also is known as the network diagram. The diagram is a graphic or visual presentation of the order of activities, plotted based in the interrelated dependencies. As an aside, the critical path diagram can be drawn by hand. Historically, that has been the way in which a CPA network diagram has been presented. However, in this day and age, there are user-friendly software programs that create the CPM network diagram.

The fourth step in the critical method path is the estimation of the completion time of each project activity. There is no hard and fast rule as to time units utilized. They are completely project dependent. As a matter of practice, a smaller project is measured in days while a larger, more complex one is measured in weeks.

The estimates are generated based on experience derived from other projects, the advice of people skilled in the type of project at hand, as well as a “best guess.” A formula exists whereby the three-points are utilized to arrive at the final time estimate for each project activity. E represents the activity time estimate:

There is a pair of ways to identify a project’s critical path. First, you literally can “eyeball” the graphic diagram. The critical path is longest one through the network diagram. Keep in mind that longest is ascertained by looking at time and not the number of boxes or unites in a particular path. The longest path is the critical path.

The last step of the critical path method is to update the network diagram. As the project progresses, amassed data can be incorporated into the graphic diagram as opposed to only estimates. Updating the network diagram with actual data provides a more realistic and accurate view of the completion date of the project. Project managers are better able to ascertain if the endeavor is on track or falling behind.

HSE Contractors is insured by the following professional liability policies, up to $4,000,000 for our clients’ protection:
General Liability.
Workers Comp

Request A Quote For Our Scheduling Services